According to this graph from Forbes (below), the types and numbers of extreme weather events and associated costs have been ramping up over the past 20 years compared to the prior 20. Economic risk per year is also ticking up, as shown by the black line, which depicts running five-year averages, ending in just over $100B at the end of 2020. However, this trend is punctuated by years during which extreme damage occurred, as shown by the red line, with close to $250B in 2005 and over $300B in 2017, with top estimates hitting a whopping $400B. 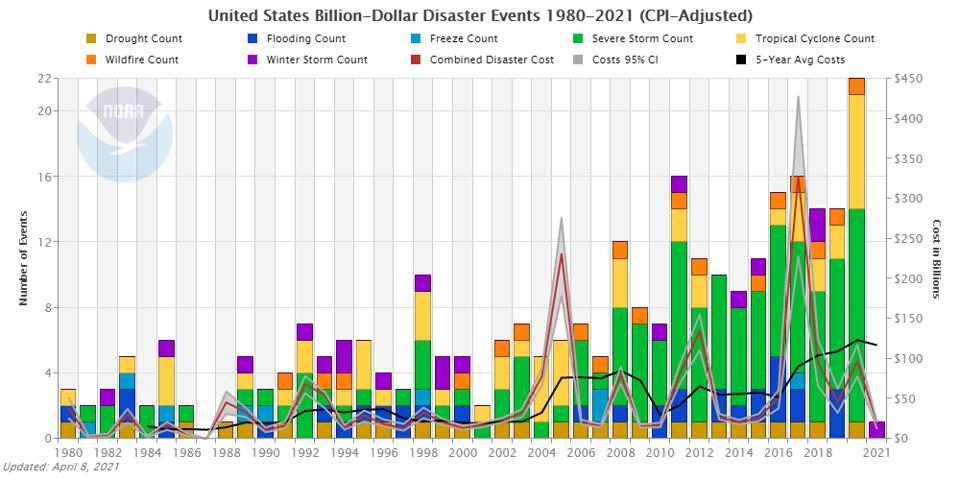 Interestingly, an analysis of the same data [see chart above] shows that while the overall number of deaths by decade has gone up dramatically in the last period over prior decades, the deaths per event has dropped by 57%, which might lead one to think that we have gotten better at protecting our human assets during extreme events. However, the cost in dollars per event has remained in the $6–8B range since 1980. This finding might represent a victory of sorts if we believe that these events have gotten more severe over time but that we’ve found ways to mitigate the increase in cost. While this presumption is unknown, what is known is that we are certainly suffering more NOAA-defined extreme climate events per unit time.

It should be noted that the United States accounts for only 6.4% of the global landmass and 4.2% of the global population, so one needs to extrapolate the data to get a truly global view of climate-induced damage.

“[The s]upply chain is a systems challenge, so any improvement per investment is a potential big payback.”

Reading that last statement conversely implies that a 1% degradation in supply chain system performance could result in a $1B loss in performance.

In the face of increasing climate event risks, the implications are significant.

While we are generally skeptical of market forecasts other than ours, one data point that might serve as a general directional marker is the following statement that supply chain consulting as a market is expected to grow to over $55B by 2027 from a mere $17B in 2020, an 18% CAGR! Given that the above-described climate events grew at a 3.6% CAGR over 40 years, this five-fold excess is tremendous. Of course, there is more here than just climate risk — namely, continued operating advantages — including exploring artificial intelligence for speed and decision making. These factors also figure into the equation, but the five-fold higher CAGR ratio does serve to emphasize the importance that companies put on supply chain security.

An additional signpost from Lux’s analysis of published and issued patents on “climate” as a technology platform is presented here.

Patent filing per annum is up 10-fold over the last two decades, reflecting the increasing sophistication, importance, and competitive field of technology that climate measurement and detection is becoming. In fact, Lux sees an emerging value chain forming, as illustrated here.

These logos are representative of emerging players. And of course, the end-users of insights are any company that produces goods and services so that the end of the chain is theoretically the entire business ecosystem itself.

Although the above image is only a year old, it is already obsolete — given how rapidly the field is evolving — in that there are now many data aggregators and analytics firms touting machine learning and artificial intelligence as part of their repertoire and inserting themselves between image processing and use of insights. The idea is that climate data combined with diverse data pools create a greater range of value to diverse end-users of insights, including industries such as insurance, hedge funds, and retail outlets.

The following examples of Lux interviews with executives from chain segment players illustrate some of the trends, dynamism, and strategies forming this nascent platform industry:

Here is one additional thought on climate tech as a platform and its urgent application to supply chain security.

The Environmental Protection Agency website has taken to discussing a future scenario developed by the Greenhouse Gas Protocol Group, as illustrated here.

Wise companies are beginning to explore the tools, data, and decisions needed to withstand both climate-induced supply chain risk as well as mitigate their contributions to that supply chain risk via GHG emissions and stay in the good graces of increasingly empowered consumers and activist shareholders (who are often both) who care about sustainability and actively make economic decisions around that concern.

Climate tech is here to stay.

The Hidden Power of Know-How

Digital Transformation in a Post-COVID World

Extreme weather events have steadily increased since 1980, and the economic risk is also rising. Kevin Pang, VP of Technology Innovation and Strategy at Lux, dives into the impacts of these trends on supply chains and the opportunities that lie in climate tech.