Furthermore, in the next decade, the supply chain of lithium and other critical materials like cobalt and nickel will be significantly stressed due to dramatic increases in battery manufacturing capacity. Alternative chemistries – including novel lithium chemistries and lithium alternatives – may be a solution for use in electric vehicles. Startups, university research teams, battery manufacturers, and automakers are rushing to develop these chemistries and are planning to reduce their reliance on expensive raw materials like lithium, cobalt, and nickel – all-important but costly ingredients. In this insight, we analyze the patent activity, discussing alternative electrode chemistries and which ones are the most promising candidates to succeed today's Li-ion batteries in electric vehicles. 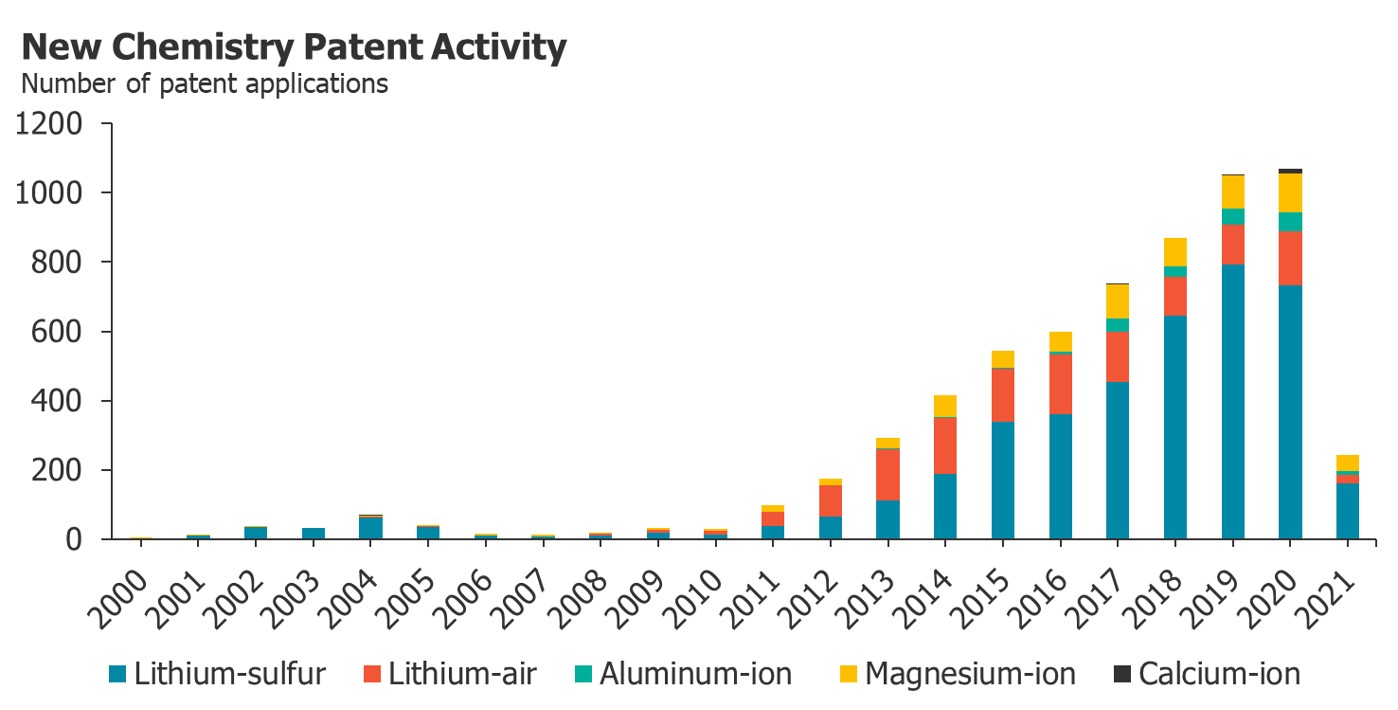 Lithium chemistries play a crucial role in vehicle electrification, as their high energy density and falling costs essentially enabled the electric vehicle. While today, many chemistries use nickel and cobalt, the nonmetal cathode alternatives explored below have the potential to lower costs wither fewer, cheaper materials.

The multivalent battery configurations are still in early-stage research, and fundamental research is needed before these chemistries can be considered for commercial uses. Al-ion is the one exception, with pilot trials underway, but it has remained in the small pilot stage for the better part of the past decade. Though the bulk of patent activity indicates Li-S chemistry as the major research area, the failure of Oxis Energy – a leader in Li-S development – has hampered the commercialization and the future outlook of the chemistry. While sluggish kinetics affect multivalent batteries, practical implementation is a major hurdle for Li-air batteries. Though there have been efforts to dedicate investments toward the implementation of next-generation batteries, commercialization of these chemistries beyond lab-scale research and small-scale testing is nonexistent. Although some alternative chemistries sound attractive, with promises of lower materials costs and wider mineral availability, clients should realize that these technologies are trying to beat a moving target, as Li-ion batteries continue to fall in costs with significant planned manufacturing capacity expansions. Disruption in the next 15 years is highly unlikely. Clients in the automotive space are encouraged to monitor academic publications for breakthroughs in these chemistries over the next 10 years but avoid placing direct bets on internal development of these chemistries.

Antimicrobial Coatings at the Front Line of COVID-19

The Future of Plastic Recycling Report

Press Release: Global Megatrends Will Transform the Chemical Industry Over the Next 20 Years

In the next decade, the supply chain of lithium and other critical materials like cobalt and nickel will be significantly stressed due to dramatic increases in battery manufacturing capacity. Alternative chemistries – including novel lithium chemistries and lithium alternatives – may be a solution for use in electric vehicles.