There are five types of fuel cells that can be used for stationary applications: solid oxide fuel cells (SOFCs), proton exchange membrane fuel cells (PEMFCs), phosphoric acid fuel cells (PAFCs), molten carbonate fuel cells (MCFCs), and alkaline fuel cells (AFCs). They operate with different electrolytes, reaction chemistries, and temperatures, but there are some common challenges, such as the shorter system lifetime and higher capital cost compared to the incumbent combustion-based solutions. To display a comprehensive overview of the technology landscape for stationary fuel cells and the distribution of players, we analyzed key developers with historical patent activity, academic publications, early-stage funding, and ongoing projects. This information serves to define future trends and, more importantly, helps identify opportunities for companies seeking to engage with players in stationary fuel cells. Note that the research institutes listed under the category of PEMFCs are limited to those focused on high-temperature PEMFCs (HT-PEMFCs), as the research on low-temperature PEMFCs is mostly for mobility applications. 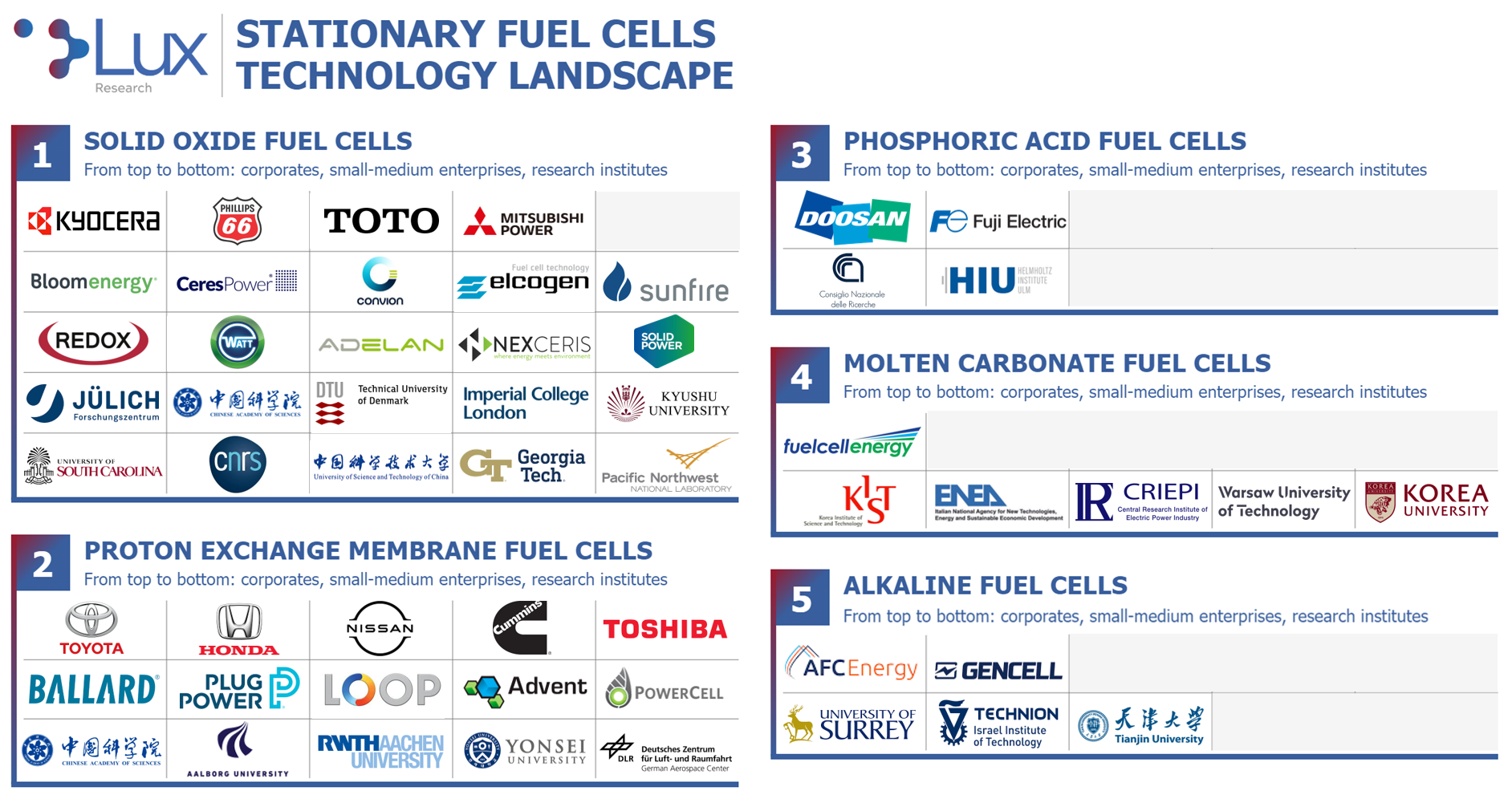 Overall, SOFCs and PEMFCs are the two types of fuel cells displaying the highest potential for adoption in stationary applications. The vast investments in SOFCs, such as the hundreds of millions of capital raised by Bloom Energy and the hundreds of millions of R&D funding from government agencies, will lower the manufacturing cost and improve the products' lifetime. As it is a proven technology for mobility applications, it is not difficult for companies like Ballard Power Systems and Plug Power to deploy PEMFC stationary power systems below 150 kW if there is high-purity hydrogen or a gas purification system.

However, to answer the question of which type of fuel cell will succeed and when we need to consider whether and where fuel cells will outcompete the incumbent power generation solutions. It is certain that fuel cells will not be competitive for hundreds- or even tens-megawatt-level power generation in this decade, as gas turbines are simply more scalable, reliable, and cheap. But fuel cells are making progress in some smaller markets for backup or off-grid power, such as data centers, telecom towers, and microgrids. For distributed generation and industrial processes, SOFCs and MCFCs are promising, as they can produce heat for sector coupling. One example project is FuelCell Energy's trigeneration process for Toyota's Long Beach FCV facility running on the biogas from a wastewater plant.

Why Hydrogen and Why Now?

Lux's latest blog takes a deeper dive into the technology landscape of stationary fuel cells - where things stand today, who the key players and technologies are, and what the future could hold.