To burn or not to burn: Are hydrogen combustion engines relevant to mobility?

Fifteen years ago, the Honda FCX Clarity was presented as the future of the car. Its hydrogen fuel cell only emitted water, and the technology seemed like the successor to the internal combustion engine (ICE). Of course, we all know what followed those announcements — Tesla’s push for vehicle electrification enticed other automakers to also pursue battery electrification, causing battery prices to crater from above USD 1,000/kWh at the time to near USD 100/kWh today. Interest in the hydrogen economy hasn’t waned; however, bolstered by interest in the broader hydrogen economy to power the decarbonization of industry, hydrogen’s role in transportation is now focused on applications where the range and charging time of batteries present a major hurdle. Medium- and heavy-duty commercial vehicles are now the current focus of hydrogen’s role in transportation.

The ICE is not quite dead (yet) and in just the first couple of months of 2022, a noticeable increase in activity for hydrogen ICEs has emerged as an alternative to fuel cells. Toyota, a leader in fuel cells for mobility, announced a project with Yamaha to develop a 5-L V8 hydrogen-burning engine, while it already had developed such engines for racing purposes in the past. For commercial vehicles, Cummins announced a 15-L hydrogen engine that shares parts with diesel and natural gas engines. In Europe, Renault has teased a hydrogen ICE vehicle. So how much life is left in the ICE? Can adopting hydrogen fuel give it an advantage over fuel cells?

Hydrogen ICEs are cheaper than fuel cells as they are more or less similar to existing engines today with minimal modifications. However, the tradeoff is that they are not zero emissions (NOx emissions must be managed) and also have a lower efficiency of roughly 40% compared to 60% in fuel cells. With lower capital expenditure and higher operational costs from higher fuel consumption, there will be a tipping point at which fuel cells become cheaper on a total cost-of-ownership basis. In this insight, we’ve modeled that tipping point to understand how many miles a truck needs to be driven before fuel cells are cheaper than hydrogen ICEs. We considered three price points for fuel cell powertrains: a high value of USD 1,000/kW closer to today’s costs (FC1000), a low value of USD 100/kW to represent a very low potential future cost of fuel cells (FC100), and a medium value of USD 500/kW (FC500). We also considered a range of hydrogen prices up to USD 16/kg, which is the price of hydrogen at retail stations today in the U.S. 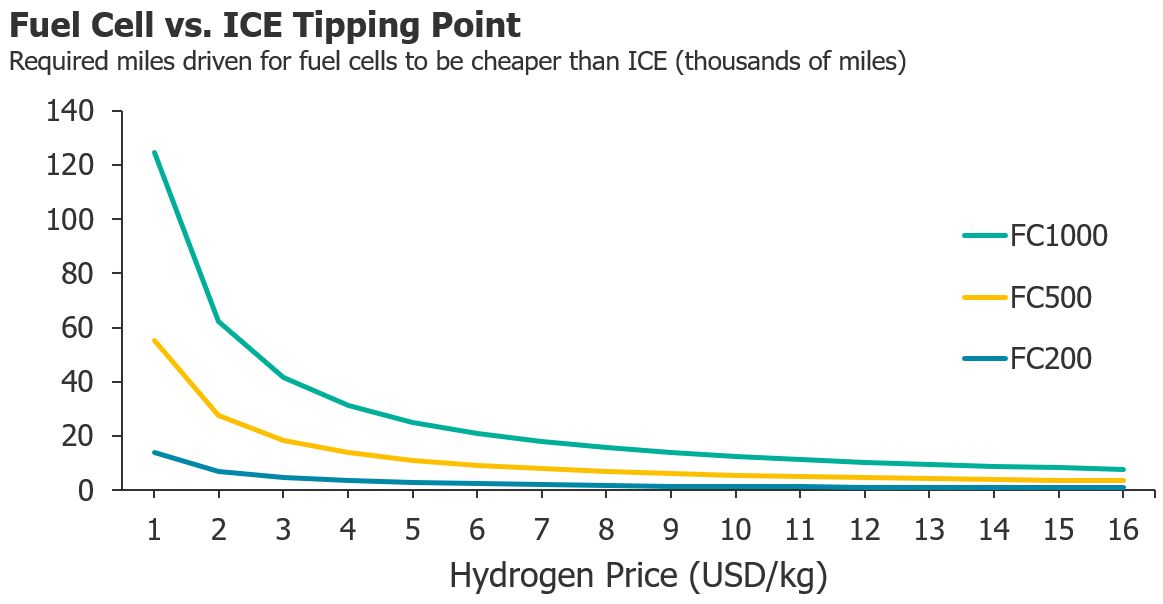 Figure 1: The fuel cell "tipping point" quantifying the number of miles a truck needs to drive before it is cheaper on a total cost of ownership basis to opt for a fuel cell instead of a hydrogen combustion powertrain.

Class 8 long-haul trucks in the U.S. travel about 100,000 to 125,000 miles per year. In any scenario, even considering high fuel cell powertrain prices of USD 1,000/kW and unrealistically cheap hydrogen costs of USD 1/kg, a class 8 long-haul truck using fuel cells would achieve a lower total cost of ownership after roughly one year of operation. This ultimately confirms that hydrogen ICE is not well suited to land-based transportation.

So why are we seeing so much activity around the topic? Hydrogen ICEs share many components with existing engines, enabling a faster and lower-cost path to market compared to fuel cells. In their fuel-agnostic platform of engines, Cummins claims all components below the head gasket are the same no matter the fuel source — diesel, natural gas, or hydrogen. With minimal modifications and capital investment, the company can begin offering hydrogen-fueled powertrains immediately to their customers, which although they come with NOx emissions do also have a lower emissions profile compared to incumbent diesel engines. This comes with a secondary benefit; it’s no secret the main limitation to growth in fuel cell vehicle powertrains is mainly due to the lack of infrastructure; fuel cell costs are high, but are expected to fall with increased production volume. Manufacturers of fuel cell vehicles are hesitant to increase production with a lack of infrastructure. Hydrogen ICEs entering the market faster with lower capital costs can catalyze growth in hydrogen fueling infrastructure.

Companies should not view hydrogen ICEs as anything more than a transition to fuel cell powertrains in mobility applications. This is due primarily to the high costs of fuel arising from poor efficiency and also that combustion powertrains still create emissions and will eventually face regulatory barriers. Companies with activities in hydrogen refueling infrastructure should take note of developments in hydrogen combustion and consider engaging with fleet operators adopting these powertrains as a catalyst for building out infrastructure and increasing utilization.

Mobility in a Post-Pandemic World eBook

Electric Vehicles Are Declining In Price And Adding Range, But Most Remain Unprofitable

In Lux's latest blog, we look into a noticeable increase in activity in the first couple of months of 2022 for hydrogen ICEs that have emerged as an alternative to fuel cells and analyze hydrogen combustion engines' relevance to mobility.