Lux Research provides insight on the status of regulations in key markets like the U.S., the EU, Singapore, Israel, Japan, and China.

BOSTON, MA, JUNE 29,  2021 – The cell-based meat industry consisted of a mere handful of startups in 2016 but has grown to about 80 startups in 2021, including companies working on end products in addition to those taking on specific technology challenges. A staggering sum of more than $800 million has been invested in the space since its arrival to agrifood in 2016, allowing many startups to transition into pilot-scale setup or even commercialization of their products. However, despite this progress, the industry still faces a major challenge in regulatory approval, according to new insights from Lux Research, a leading provider of tech-enabled research and innovation advisory services.

Lux’s new report, “How Will Cell-Based Meat Be Regulated? An Overview of the Current Global Regulatory Landscape,” provides an overview of the current status of regulations in key markets like the U.S., the EU, Singapore, Israel, Japan, and China. “In December 2020, Singapore became the first country to approve cell-based meat, spurring industry momentum,” explains Harini Venkataraman, Ph.D., Analyst at Lux Research and author of the research. “While this is a step in the right direction, there is still a lack of clarity on global regulations related to cell-based meat.” 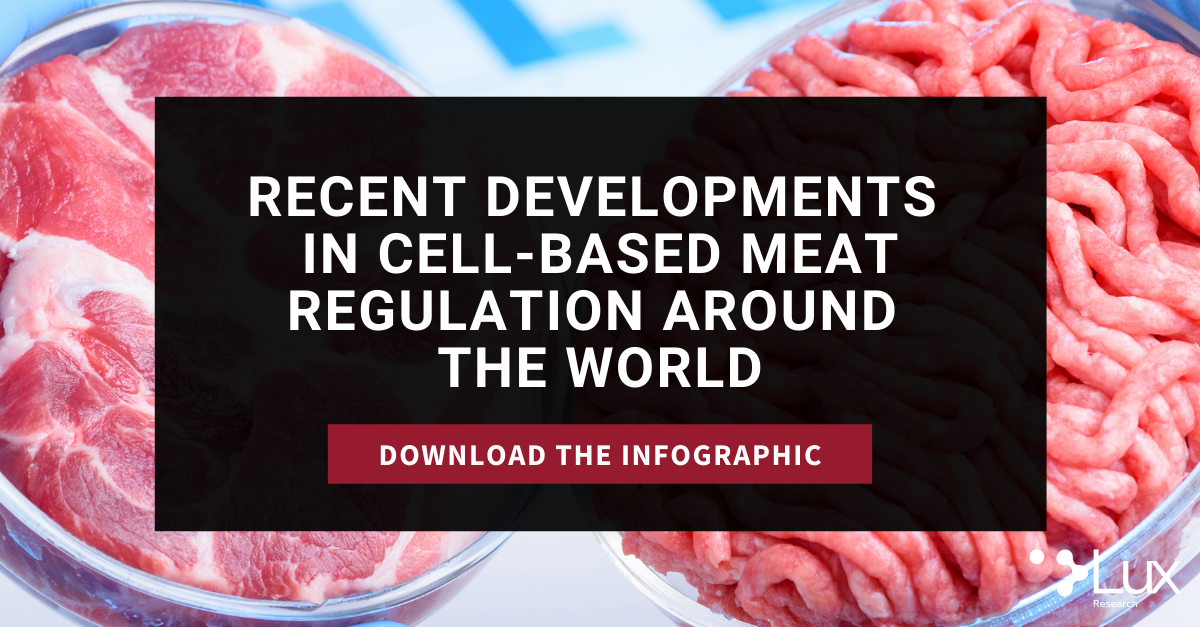 In addition to Singapore’s historic approval, there have been several interesting developments in recent years across the globe in the cell-based meat landscape. In March 2019, the U.S. Department of Agriculture and the Food and Drug Administration released a formal agreement to create a joint regulatory framework for cell-based meat product approval. Interestingly, this joint proposal will cover only livestock and poultry, but not seafood, which will fall solely under the FDA’s jurisdiction.

In the EU, cell-based meat will be regulated as part of the EU’s Novel Food regulation published in 2018. While this streamlined process allows for EU-wide approval, the process requires 18 to 24 months. The EU is viewed as conservative geography in terms of cell-based regulations, making even some European startups shift their focus to other countries for their initial market entry. In Japan, the Center for Rule-making Strategies (CRS), a think tank, launched the Association for Cellular Agriculture to advise on regulations to commercialize cell-based meat in the Japanese market.

While cell-based meat is still a nascent industry in China, industry players recognize the importance of novel food production methods to address the region’s looming food security challenge. In June 2020, a Chinese official called for urgent measures to execute a regulatory framework for cell-based meat, including the possibility of regulating it under China’s existing novel food regulation. Israel is considered to have a very favorable regulatory landscape for cell-based meat, given the government support and involvement. Although SuperMeat opened a test restaurant in Israel, as of June 2021, cell-based meat products are not regulated.

“Singapore’s regulatory approval is a positive development in the industry that sets the stage for other countries to follow suit,” adds Venkataraman. “Although countries like Singapore and Israel have favorable regulatory landscapes, these small markets will not be enough for widespread adoption and market penetration. Larger nations will need to remove regulatory barriers to unlock a mass market.”

If you are interested in speaking with an Analyst to learn more about this research, please email press@luxresearchinc.com.

- Infographic: Recent Developments in Cell-Based Meat Regulation Around the World

- Blog: Cell-based Meats the State of the Industry in 2020

- Blog: The Future of Meat is... Protein

A staggering sum of more than $800 million has been invested in the cell-based meat space since its arrival to agrifood in 2016, allowing many startups to transition into pilot-scale setup or even commercialization of their products. However, despite this progress, the industry still faces a major challenge in regulatory approval.