The Energy Sector Needs IT Support, but Big Tech Companies Are Not Looking to Become Energy Natives

Big tech companies aim for 100% renewable energy by 2030 – are they doing enough to support the energy transition?

BOSTON, MA, MAY 20, 2021 – The information technology sector is both a large consumer of renewable electricity and an enabler of the energy transition through digitization. IT uses about 1% of the world’s electricity, and that share is increasing, according to a new analysis from Lux Research, a leading provider of tech-enabled research and innovation advisory services. Because that energy consumption is getting concentrated within a few large companies – namely, Facebook, Amazon, Microsoft, Google, and Apple – climate action is both needed and straightforward.

Lux’s new report, “The Energy Transition of the IT Sector: Market Forecast and Opportunities,” looks at the activities of the IT sector in the energy transition and assesses the opportunities and threats it may pose to the energy sector. The use and traffic of data centers has grown at a CAGR of between 35% and 40% in the past decade. In comparison, the energy consumption by data centers has stayed relatively constant – growing from 194 TWh in 2010 to 201 TWh in 2020. Despite the modest and efficient growth in global data center energy consumption, there is still a reason for concern. 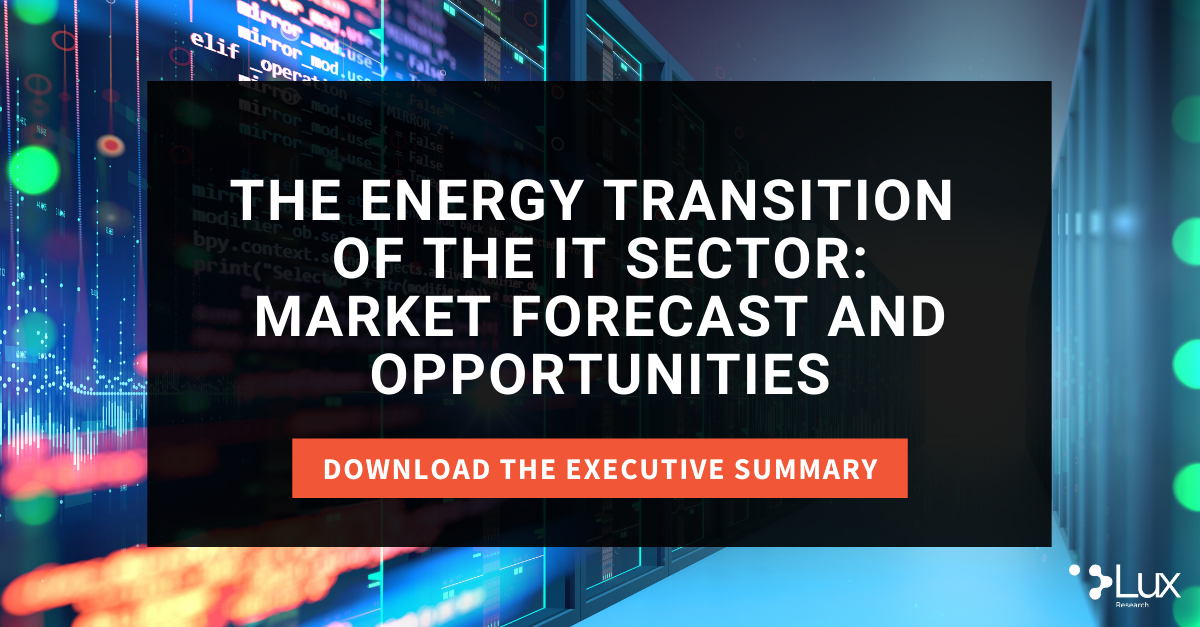 “In the past 10 years, there has been a clear trend in the rise of extremely large data centers that are commonly owned – or contracted – by large technology companies like Facebook, Amazon, Microsoft, Google, and Apple,” explains Arij van Berkel, Ph.D., Vice President at Lux Research and lead author of the report. “While the information technology sector as a whole has seen very modest increases in electricity consumption, these companies have seen an average year-over-year increase in electricity consumption of 20% – reaching as high as 43% in some years.”

In addition to the sociopolitical pressure being levied at the big tech companies, growing energy consumption is another item jeopardizing the sector’s societal license to operate. However, out of all the license-to-operate concerns that plague the industry, the carbon footprint is probably the easiest to solve. The road to decarbonizing Scope 1 and Scope 2 emissions is clear for big tech companies – secure renewable electricity. They are doing precisely that, and as an industry, they are leading the way in power purchase agreements (PPAs). The companies enable massive investments in renewable energy generation capacity this way and are rightly proud of their efforts.

On the other hand, big tech is not actively involved in the opportunities presented by the energy transition. While they have voiced interest, the big tech companies have taken mostly a back-seat and launching-customer stance in response to the energy transition, as evidenced by their actions. The near-term opportunity for utilities is simply offering attractive PPAs to technology firms planning on ramping up data center capacity and focused on reducing their carbon footprint. The tech sector is a partner and not a disruptor for the energy sector.

Offering PPAs to big tech companies can be a good strategy for power companies to quickly grow their installed base of renewable energy generation assets. However, long-term, plainly offering PPAs won’t be sufficient in a likely more competitive market. Instead, utilities should explore value-added services beyond attractive PPAs – and the likely differentiator will be in providing energy management solutions catered toward data centers. Download the executive summary of the report to learn more.

If you are interested in speaking with an Analyst to learn more about this research, please email press@luxresearchinc.com.

- Executive Summary: The Energy Transition of the IT Sector: Market Forecast and Opportunities